My son will be graduating from High School this June. I have already began preparations for the big event and one of those tasks was to create his announcements. I chose not to purchase the standard school announcements, rather I wanted them to be personalized. I wanted them to represent my son, including the photograph...no faux tuxedo pictures for us!!

I figured that by making them myself it would give us the chance to save a little money too! I had most of the supplies already on hand, being a CTMH consultant was a big plus! With the few other products needed, photo paper and ink to print at home and postage stamps to mail them, my total cost was under $70! {I made 35 announcements} They included the graduation ceremony announcement as well as party invitation for the celebration to follow. 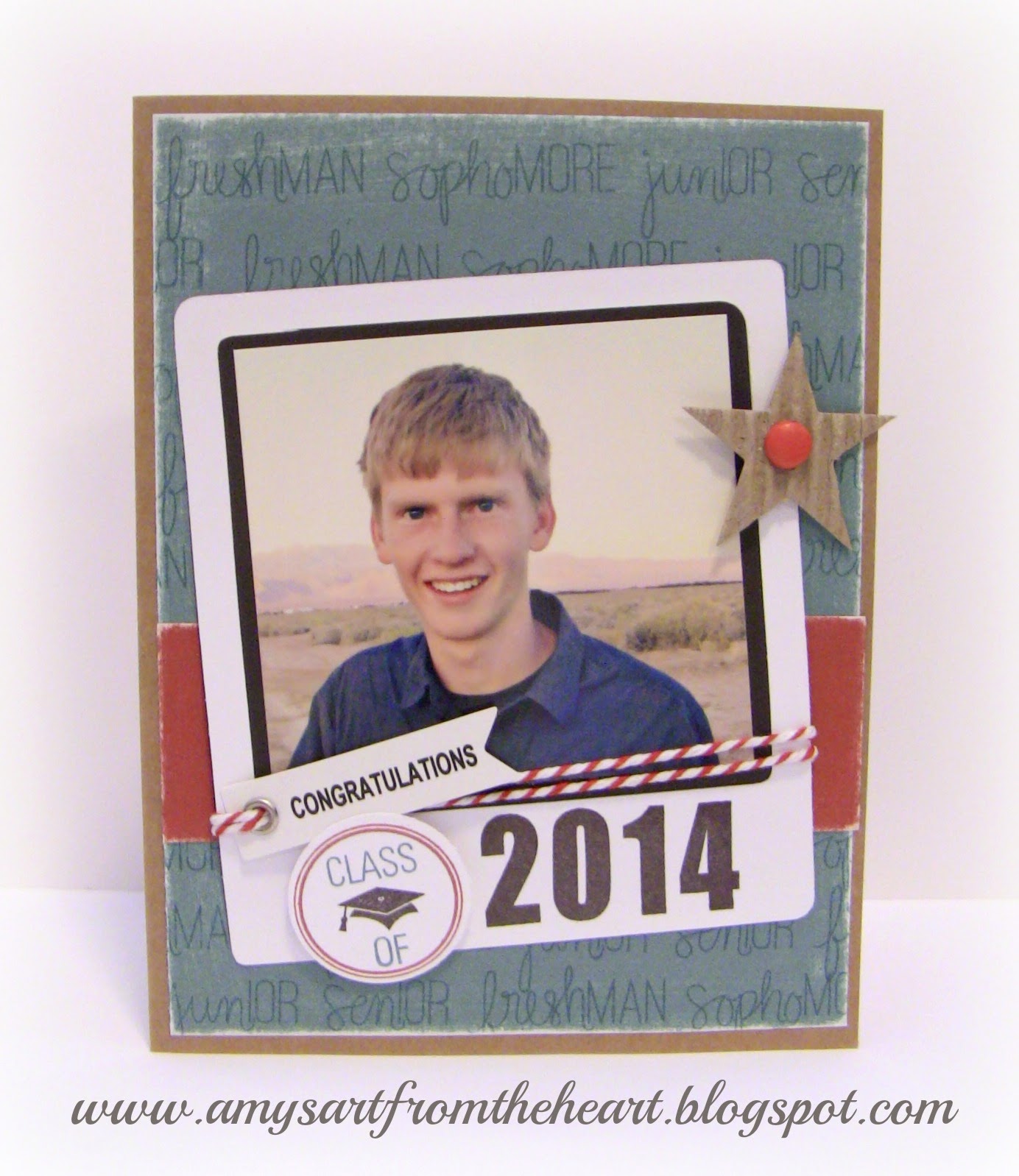 Once I had my idea and one test announcement created, I gathered everything I would need and formed an assembly line. My first tip~ have lots of adhesive ready to roll! {a little bit of chocolate nearby your workstation helps too!} 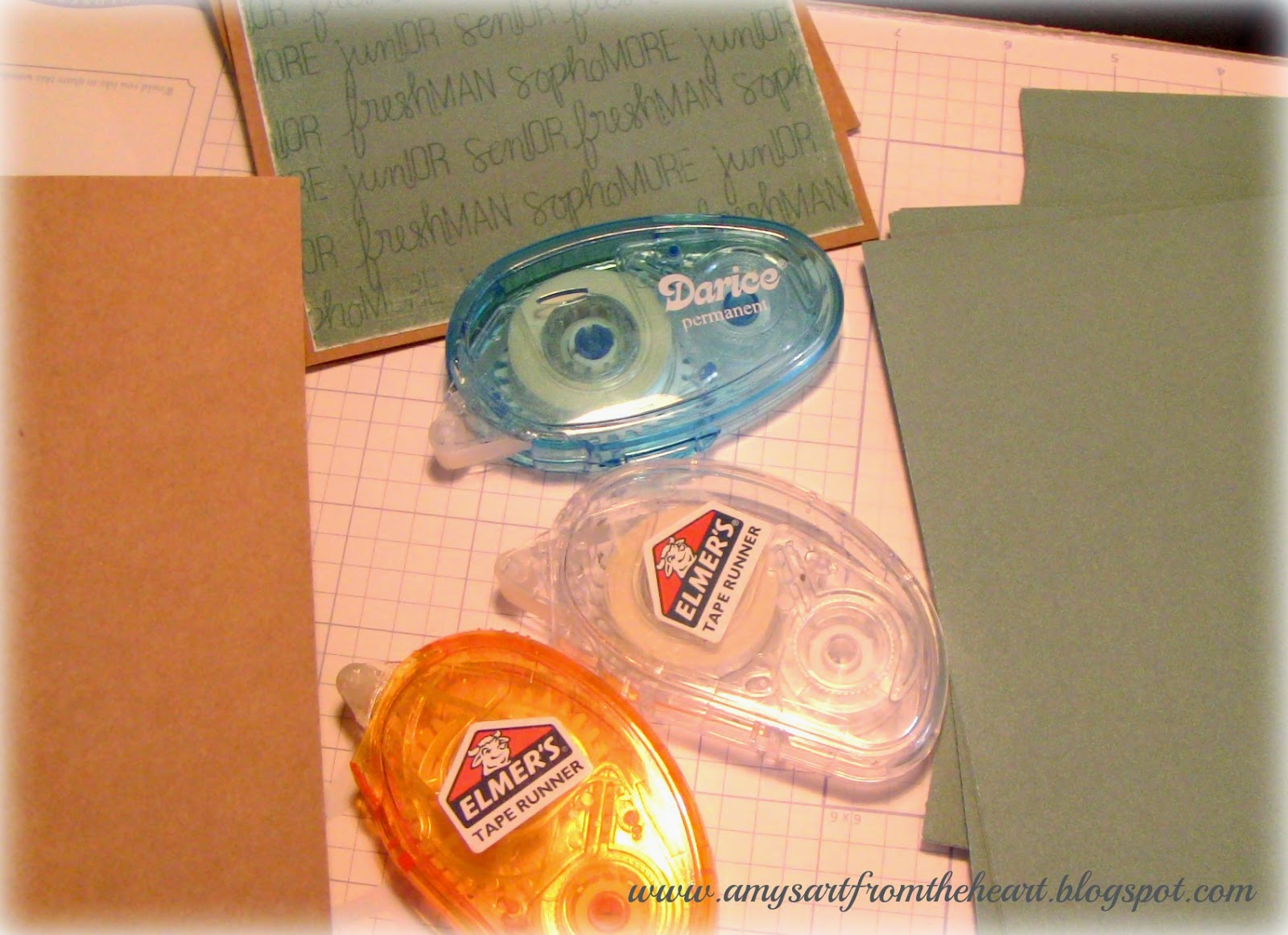 Don't panic when you don't have enough supplies, just get creative!! I selected some corrugated chipboard stars to use on the front of the announcement. I had about half of what I would need, but this was an older supply item and was no longer available. My solution was to cut the same size stars on Kraft cardstock using the Art Philosophy Cricut cartridge. Then I ran them through a Cuttlebug embossing folder to give them the same texture as the original stars. Worked perfectly!﻿ 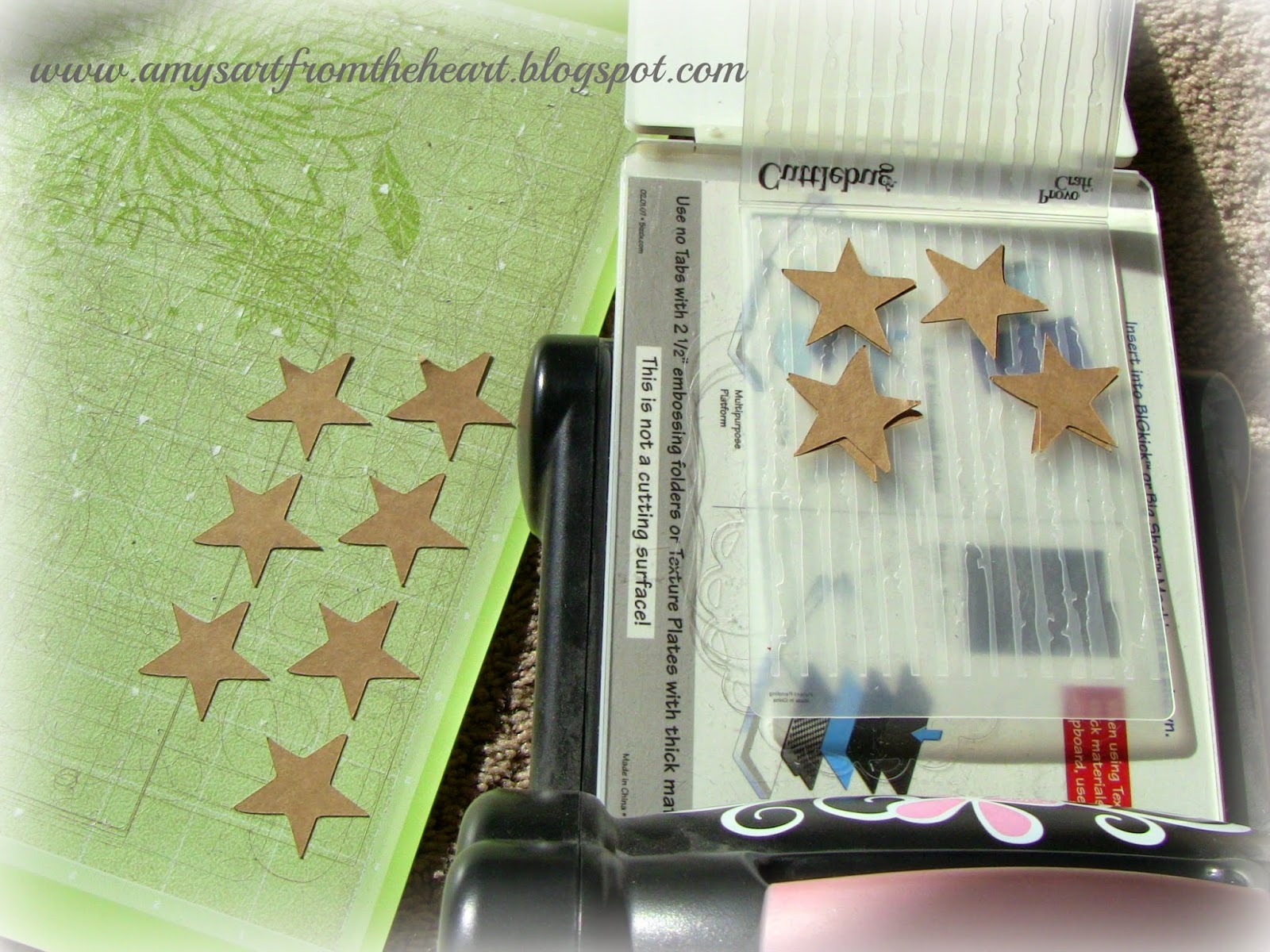 Forming assembly lines is the easiest way to complete a big project like this. Cut all your cardstocks, stamp everything together, sand all your paper, cut out shapes on your Cricut, thread your twine and tie, glue, etc. etc.!! I worked on the announcements in blocks of time over the course of a couple days. I would run loads of laundry in between or get the oven warming before starting dinner. {always something else to be done right moms?!} In all, I logged 14.5 hours to complete them and get them all to the post office.﻿ 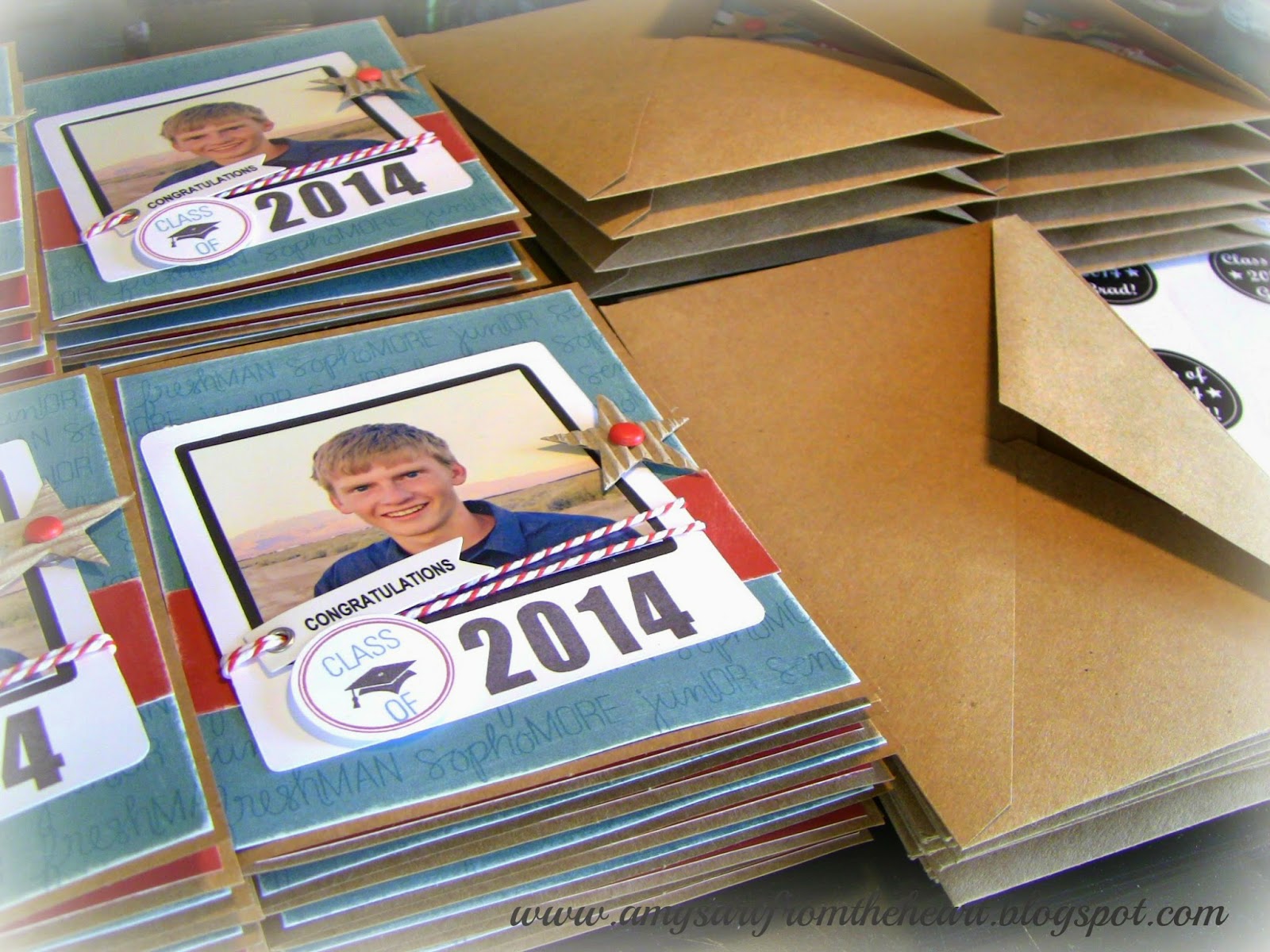 I loved the idea of a pocket on the inside. It would provide a little spot for the announcement as well as the party invite. I created the announcement using the PicMonkey photo editing online. I simply chose the fonts and colors and played around until I liked it and was able to print it at home. 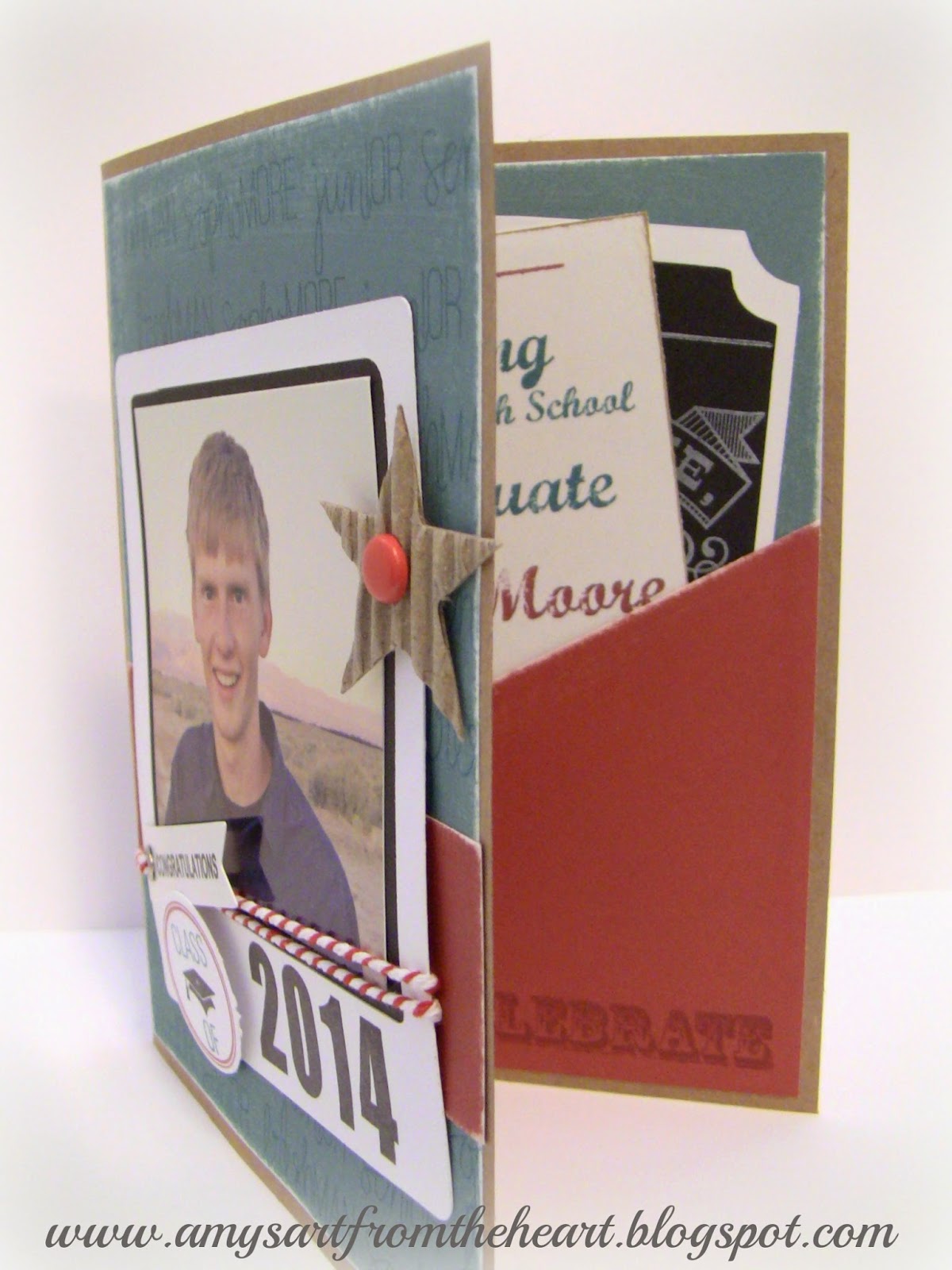 For the party invitation I got to play with a brand new stamp set called Fancy Fair. I chose a chalkboard look which will later coordinate with some party decorations I plan to create. Combined with the ruby red and twilight blue, it represents our all American son and his graduation BBQ celebration! 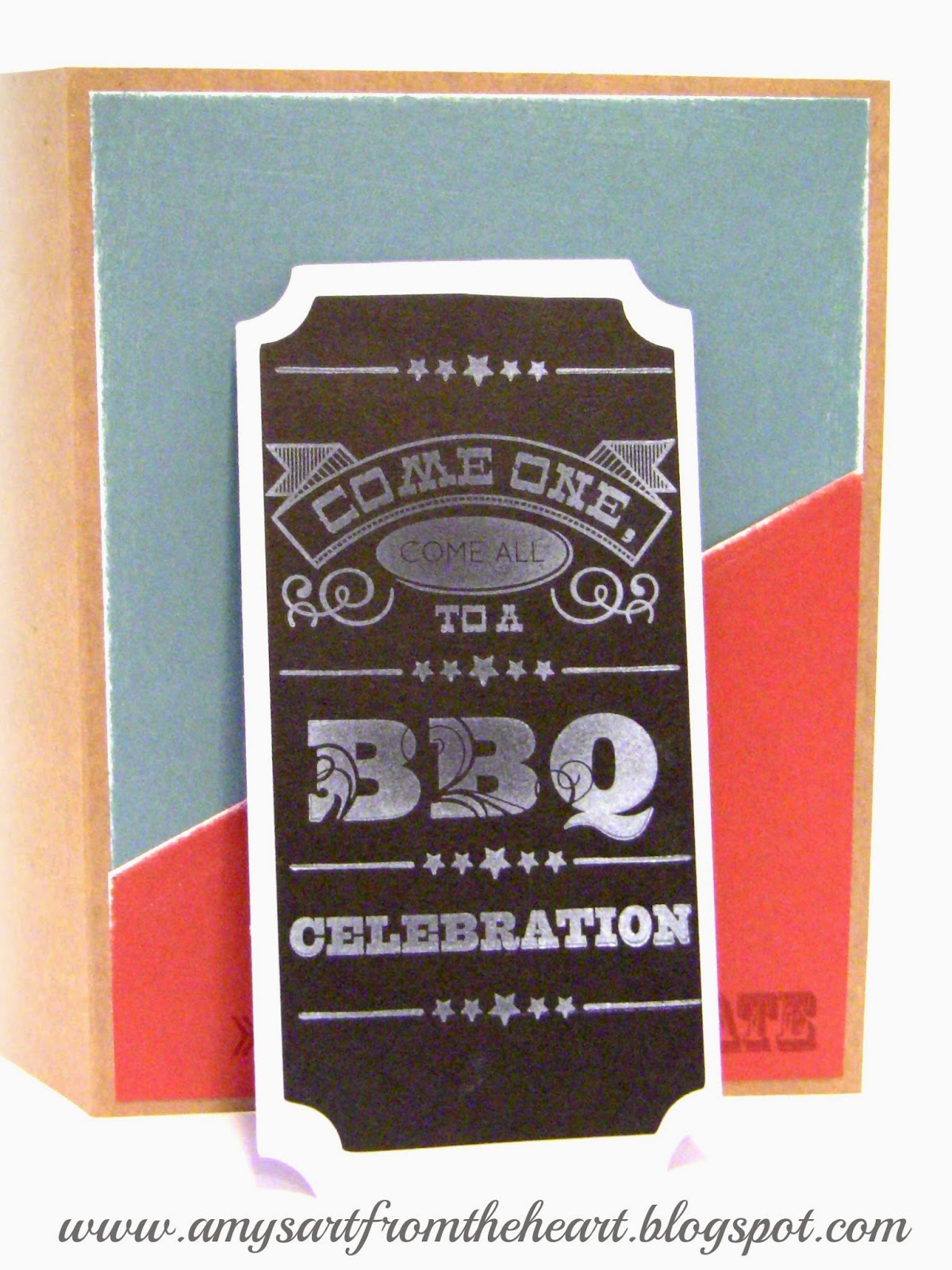 I knew this would be a big project to tackle, but I really wanted to do it. It would have been much easier to just purchase the generic school ones, but that would not represent my son or myself. He is a one of a kind kid and deserved a one of a kind announcement. And even though it took many hours to complete, each hour was a moment for me to contemplate on his childhood, remember some cherished moments and think about how he has grown into a wonderful young man. It also helped me to let go a little bit more, accepting that he will begin his own journey soon. If you can make your child's announcements yourself, I say "do it"! It is truly a rewarding experience!
Posted by Amy Moore at 4:31 PM 1 comment:

Today I am playing along with the sketch at Freshly Made Sketches. I am using some left over paper and kraft cards from a recent BIG project I completed, my son's Graduation announcements! Pictures of those to come soon! I also got to play with some new Heidi Swapp products I purchased while on Spring vacation. 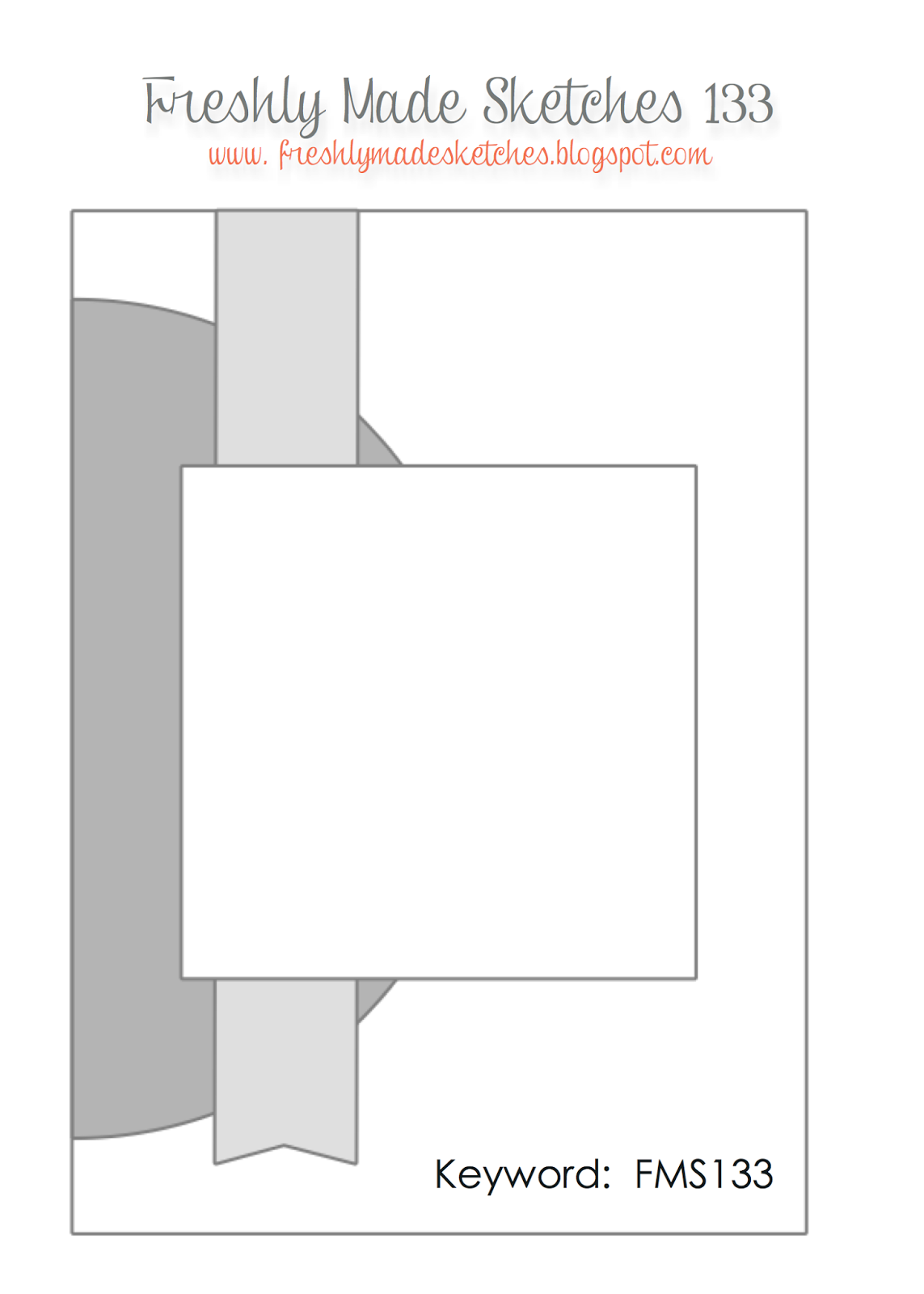 I used some older Later Sk8r papers, Heidi Swapp arrow and some negative cut chevrons from a background template cut on the Cricut. 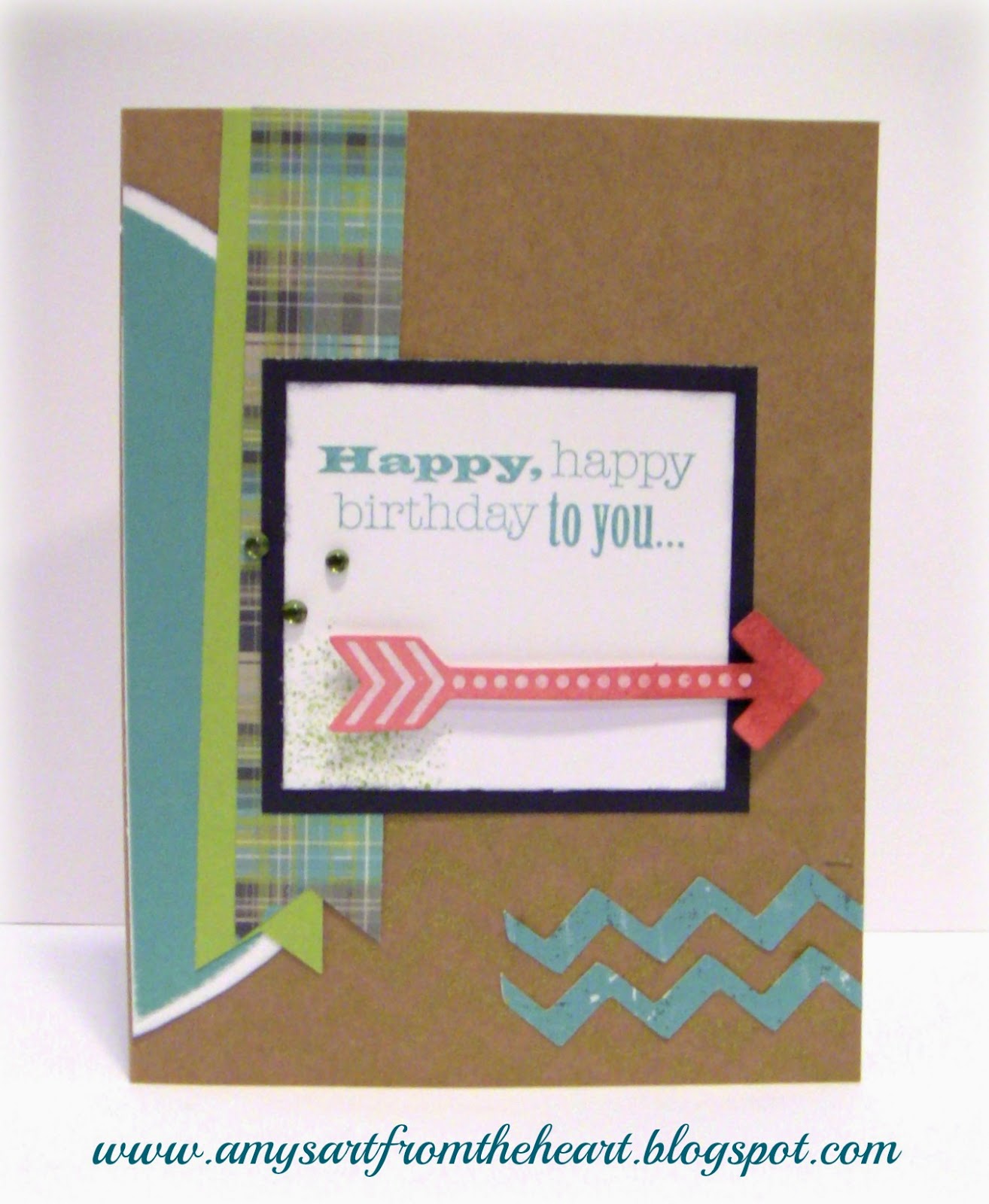 Inside {I used the negative cut from the Cricut} 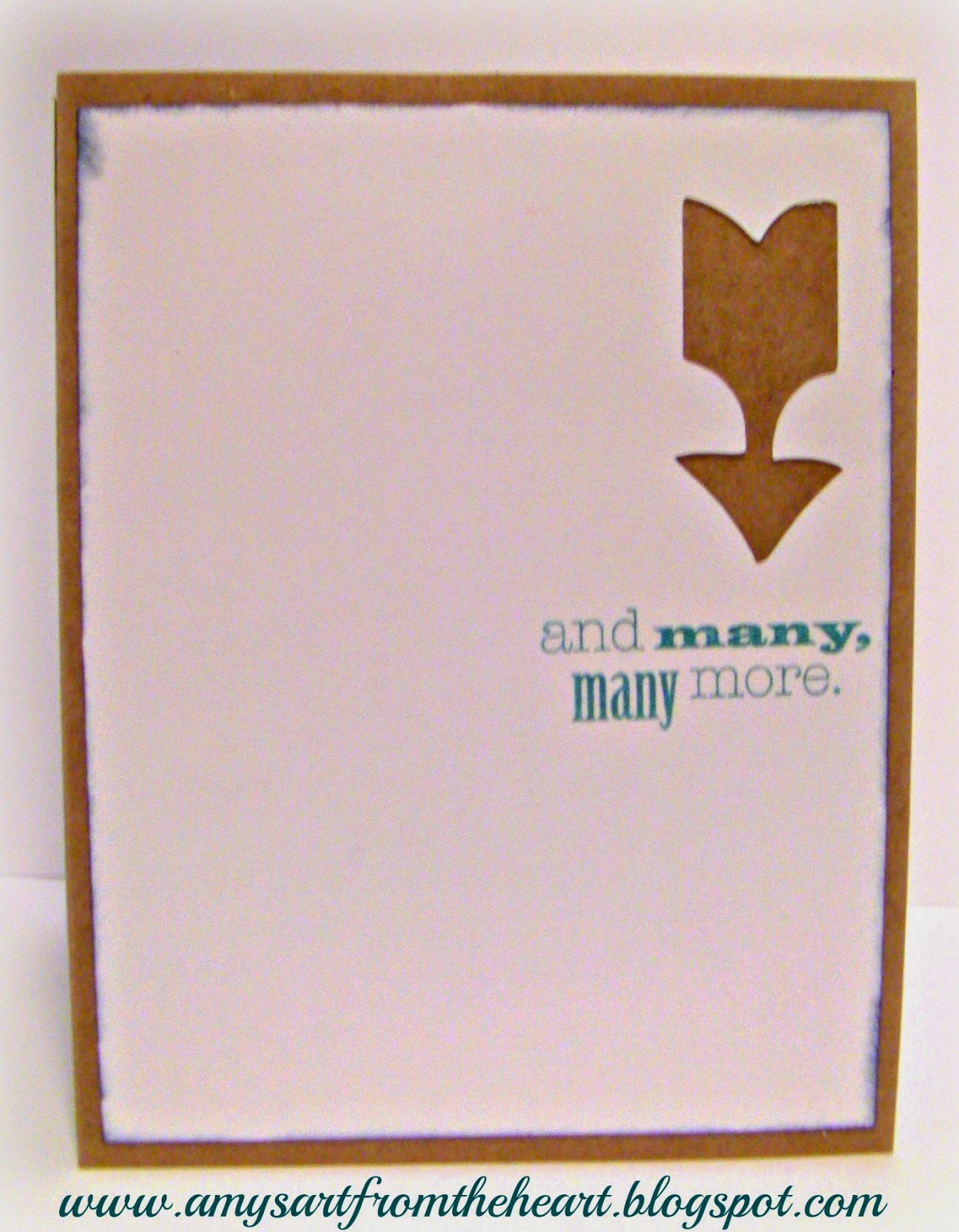 Today's little album was created all from one key on the Artbooking Cricut cartridge. You can set your dial size and just pick which pages and pockets you want to cut. I used some twine and needle and threaded directly into the spine to hold it all together. Then I decorated with some embossed cardstock, glitter paper, stamping, Washi tape and Lollydoodle Stickease! 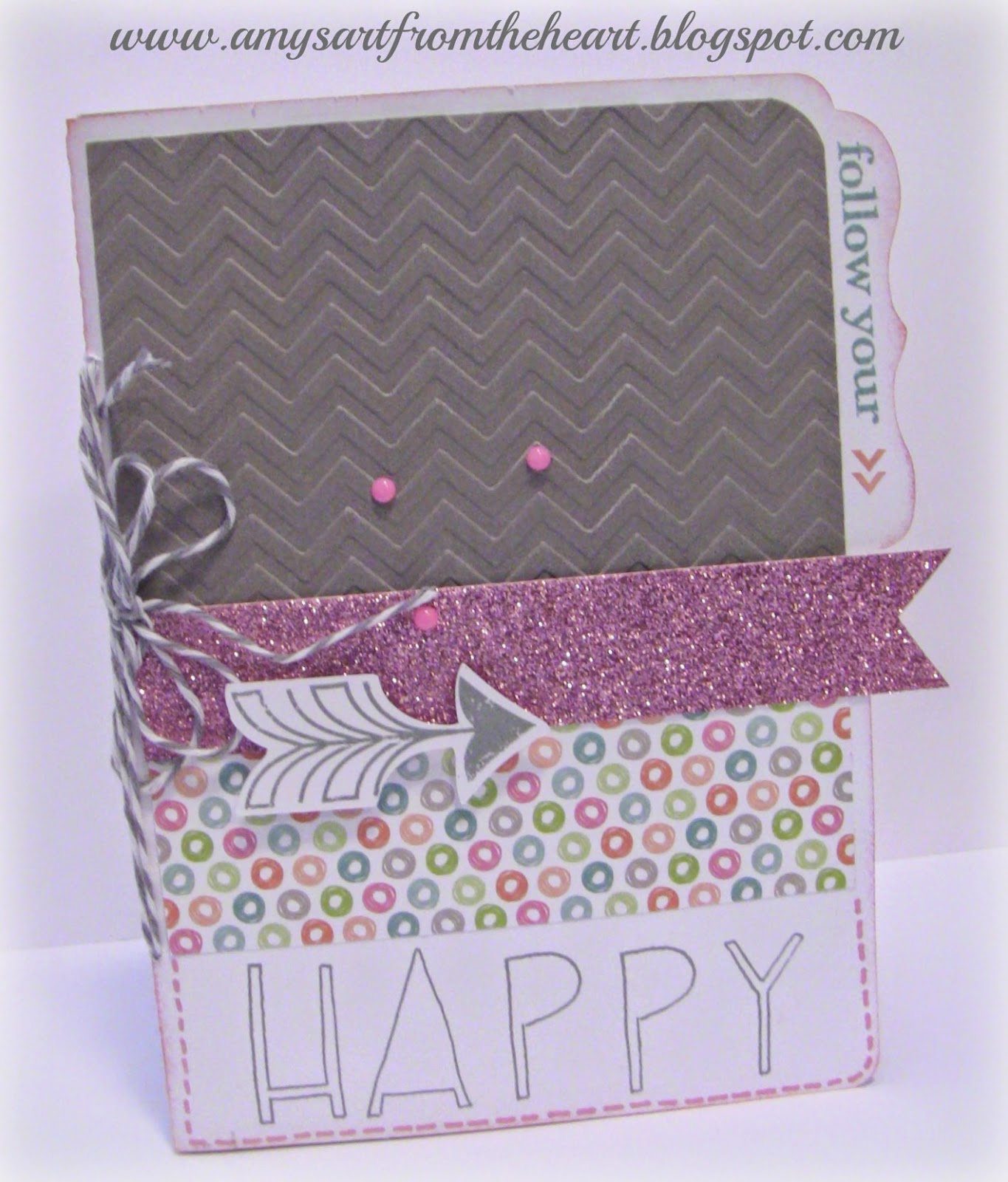 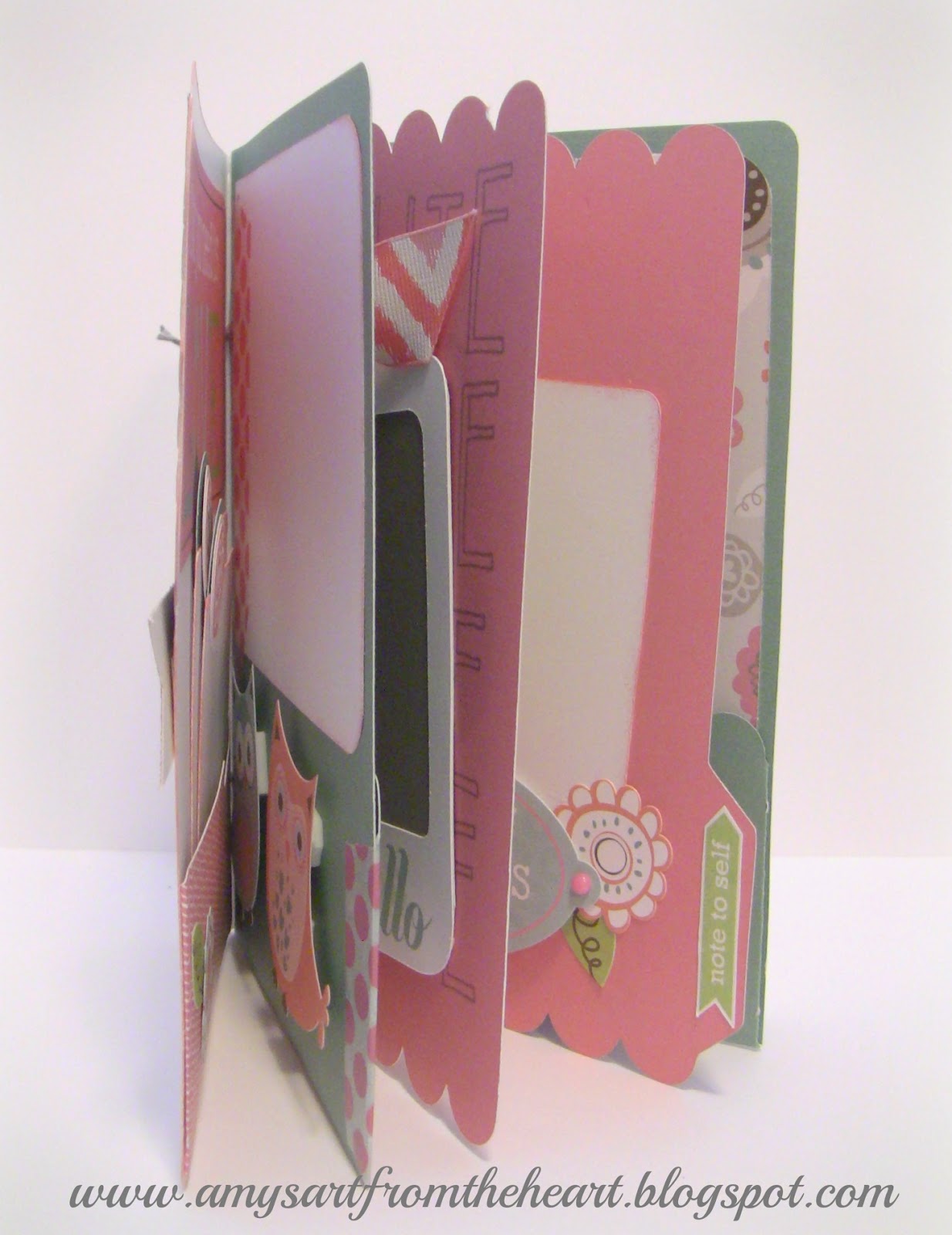 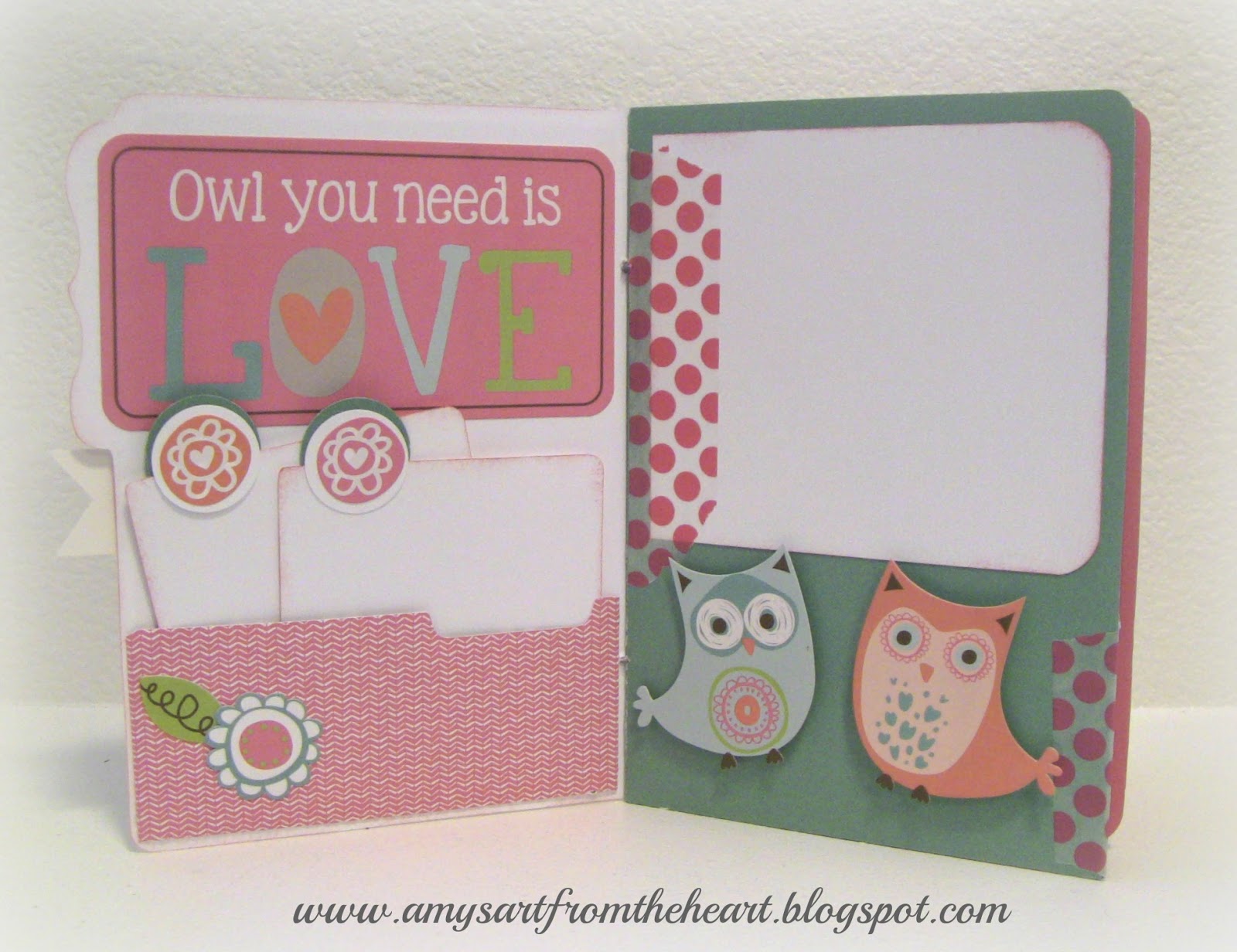 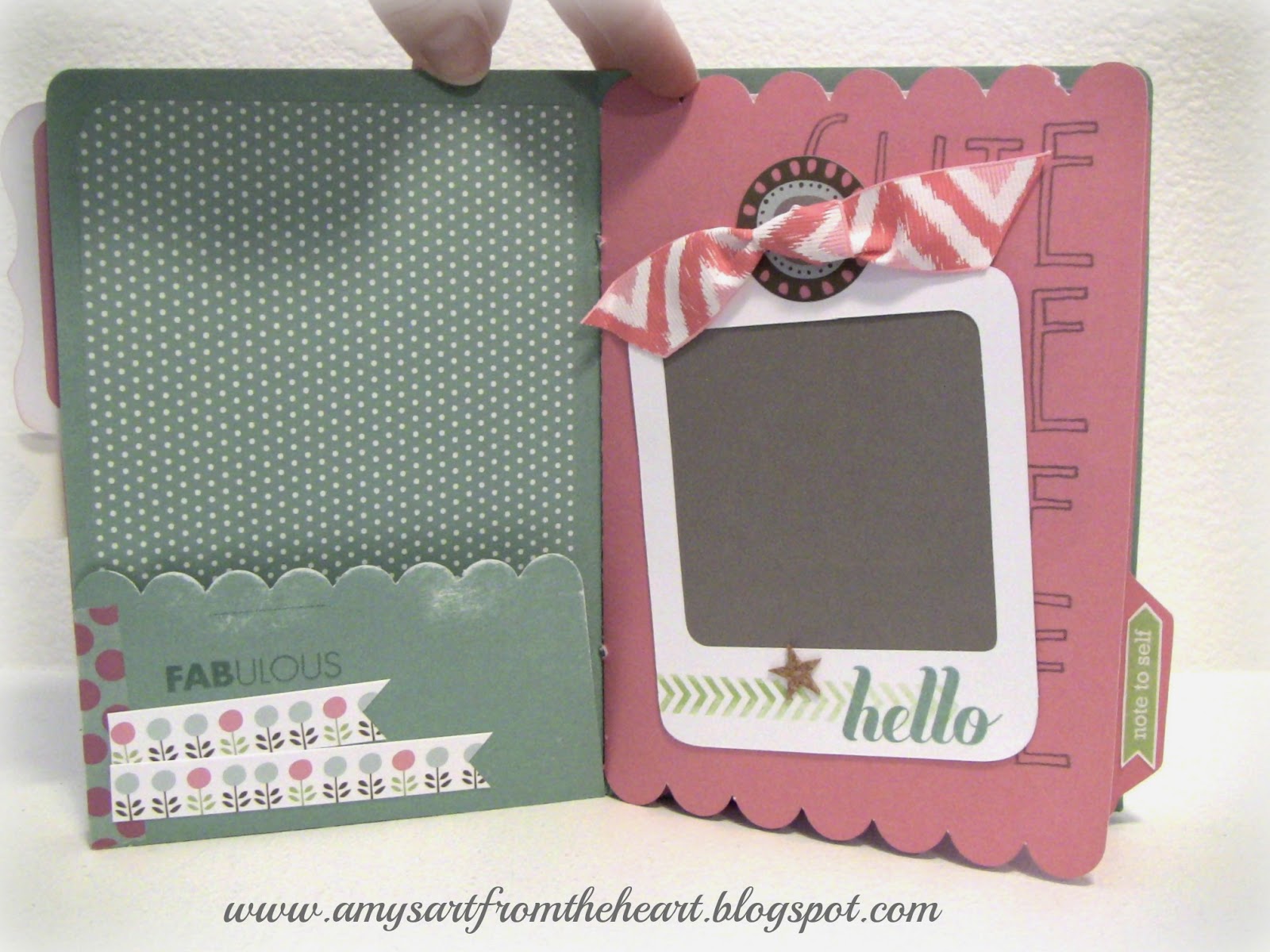 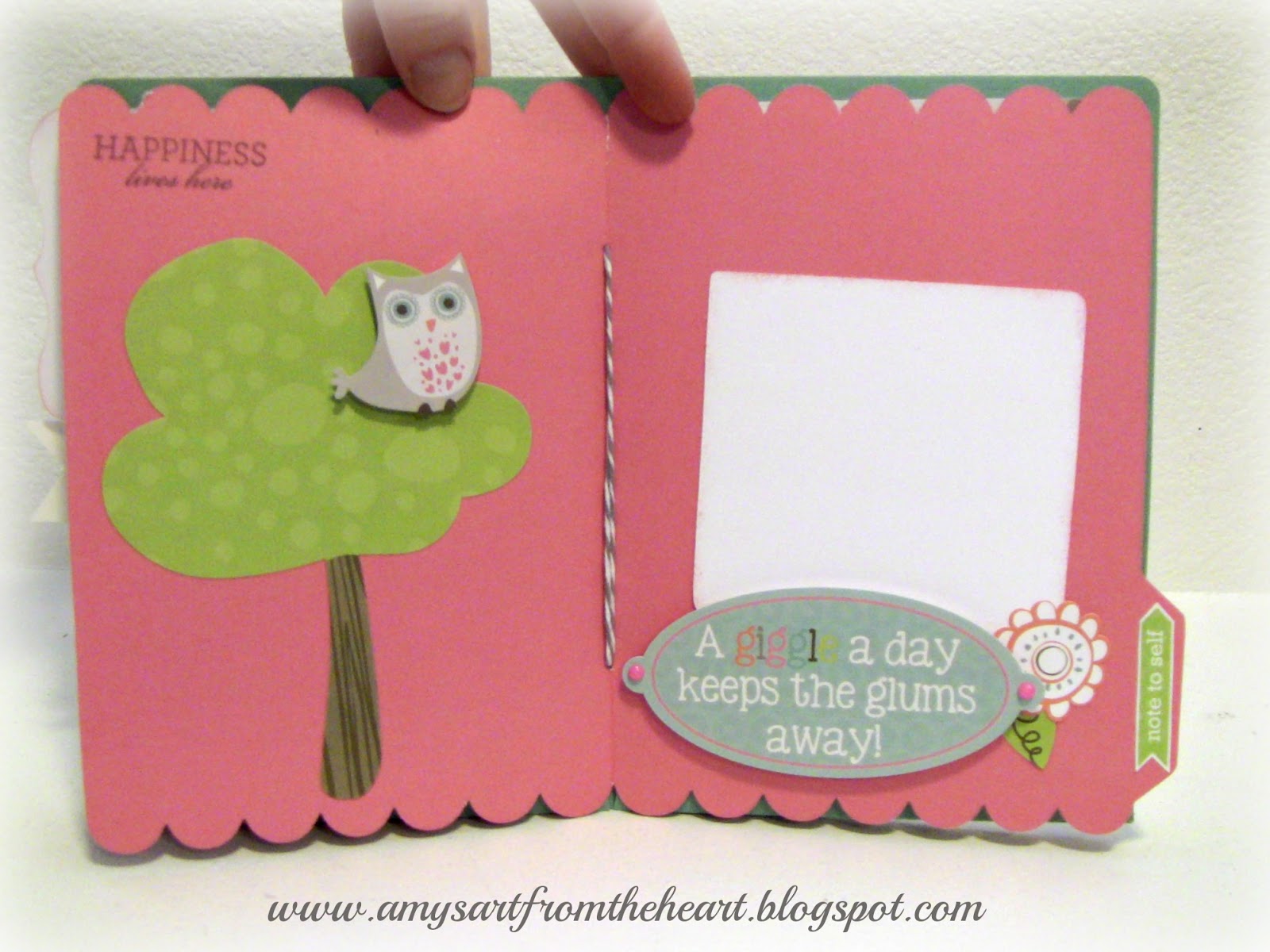 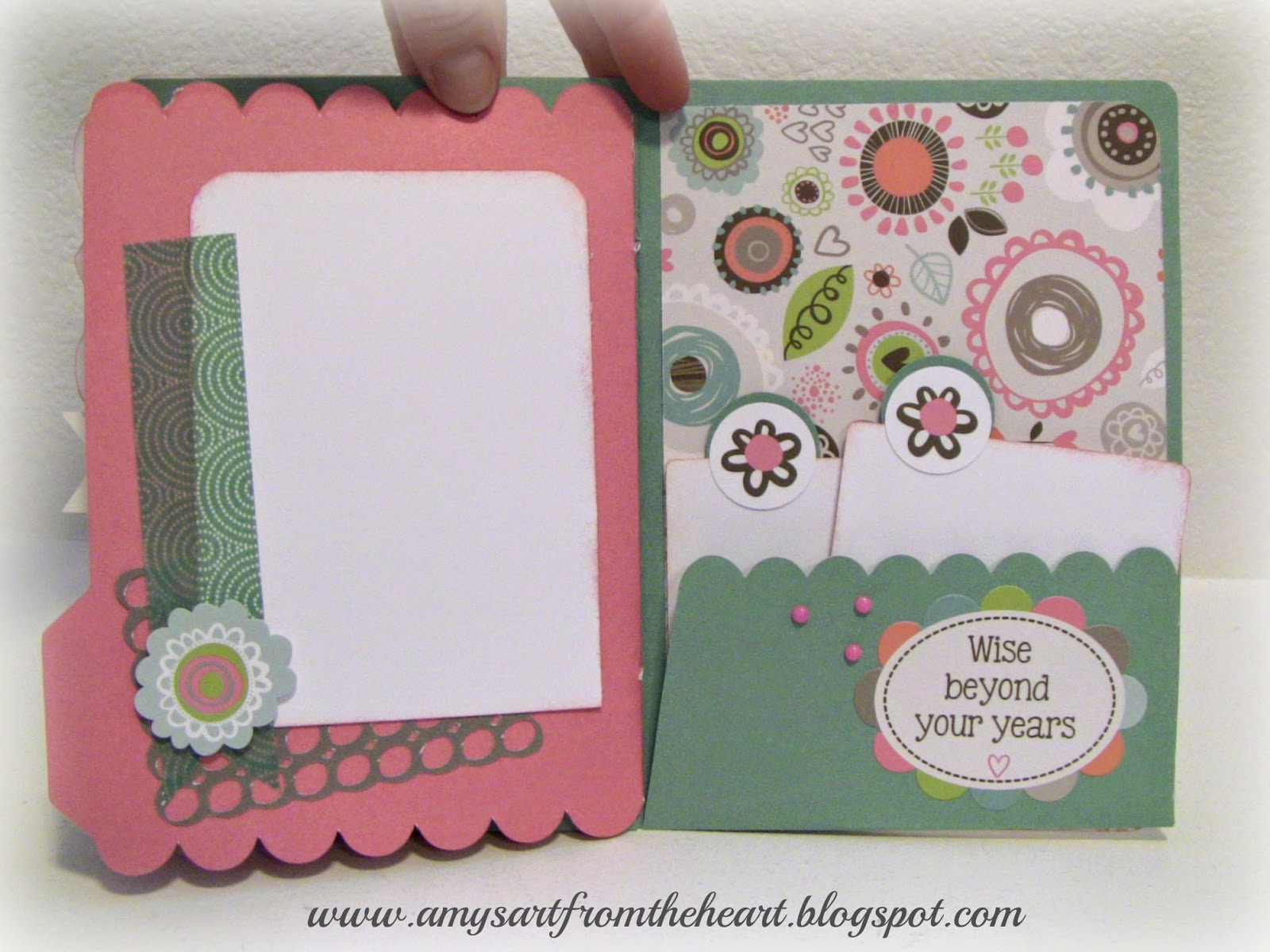 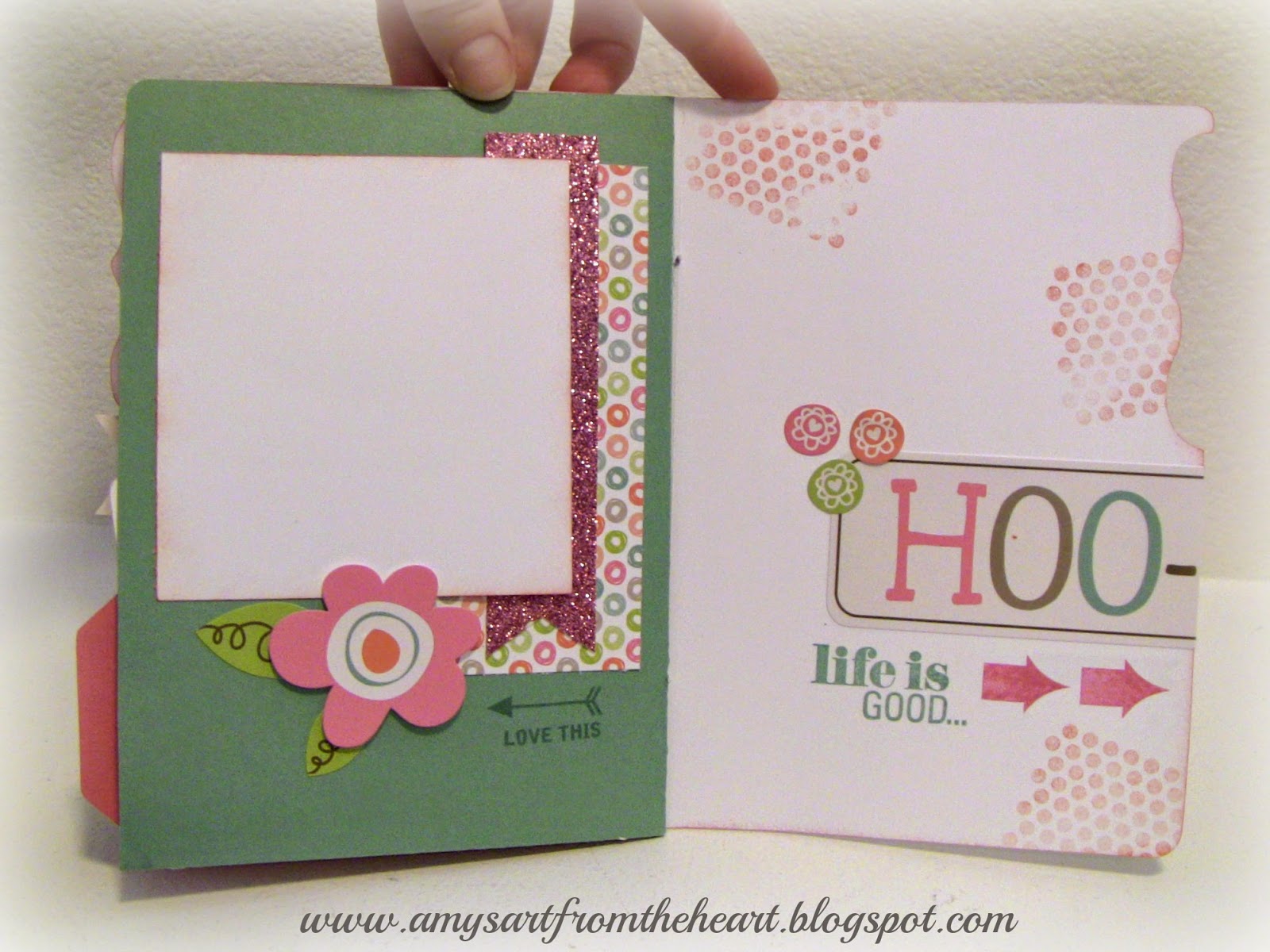 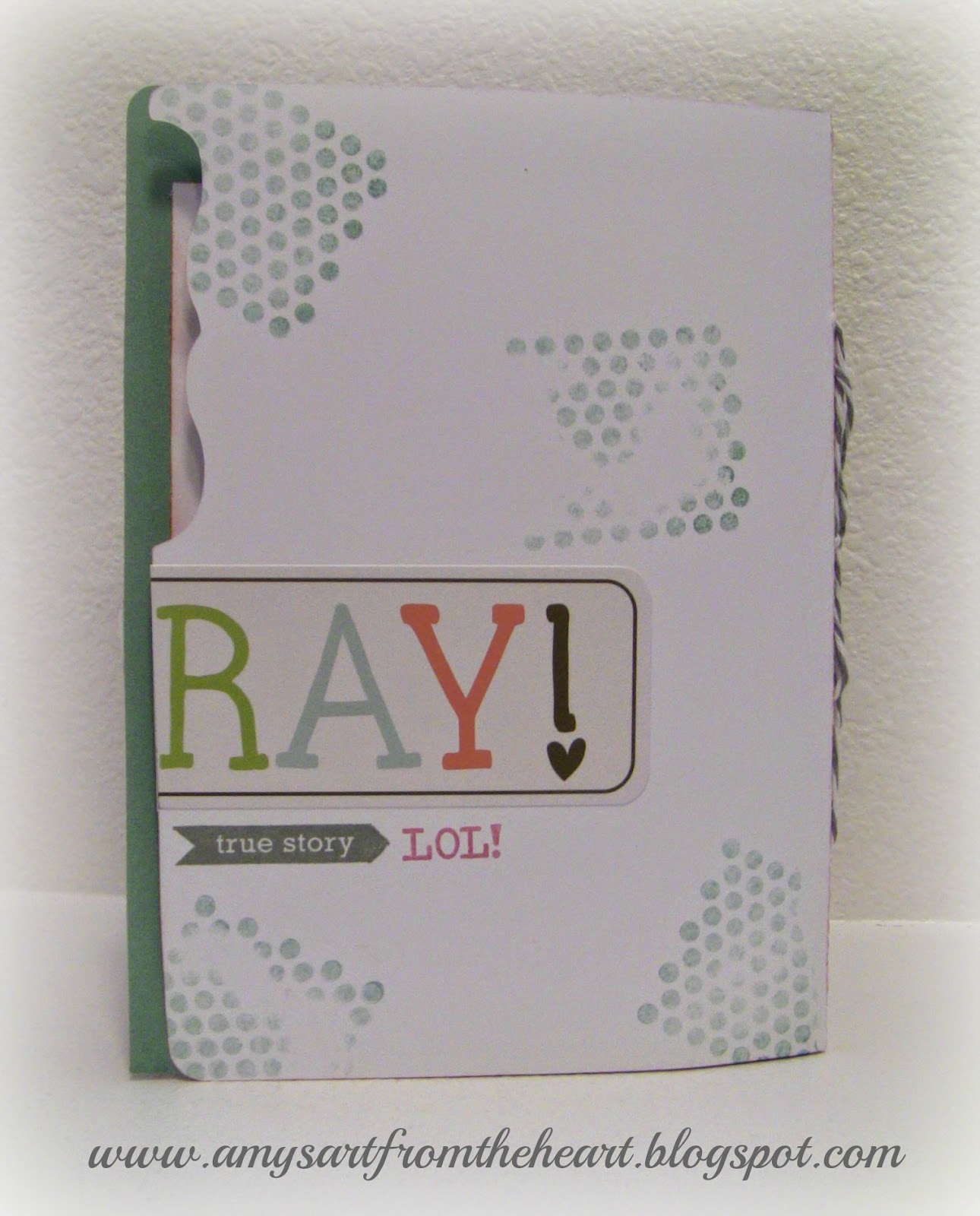 Easter is on It's Way!

Easter will be here soon! Which means a break from school for me and my kids too! {Yeahhhhh!}

A quick and easy project for the kids on Easter Sunday are these little bunny boxes. They are cut out on the Artiste cartridge at 2 1/2 inches. I chose lots of retired pastel cardstocks and a simple egg stamp for the bottom of the box before I folded them up. They require no adhesive making it a fast project to do. These will look so cute scattered on the grass this Sunday! 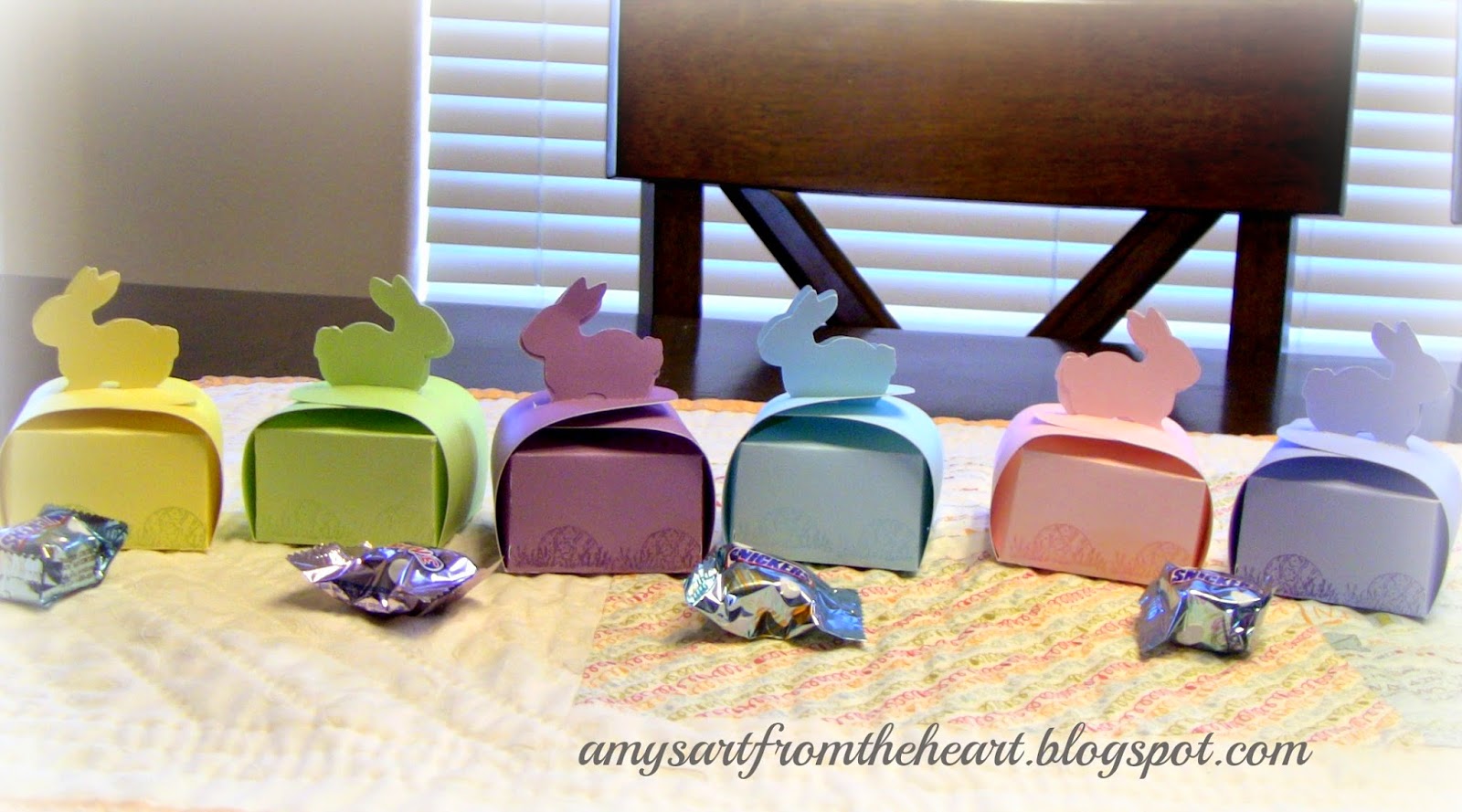 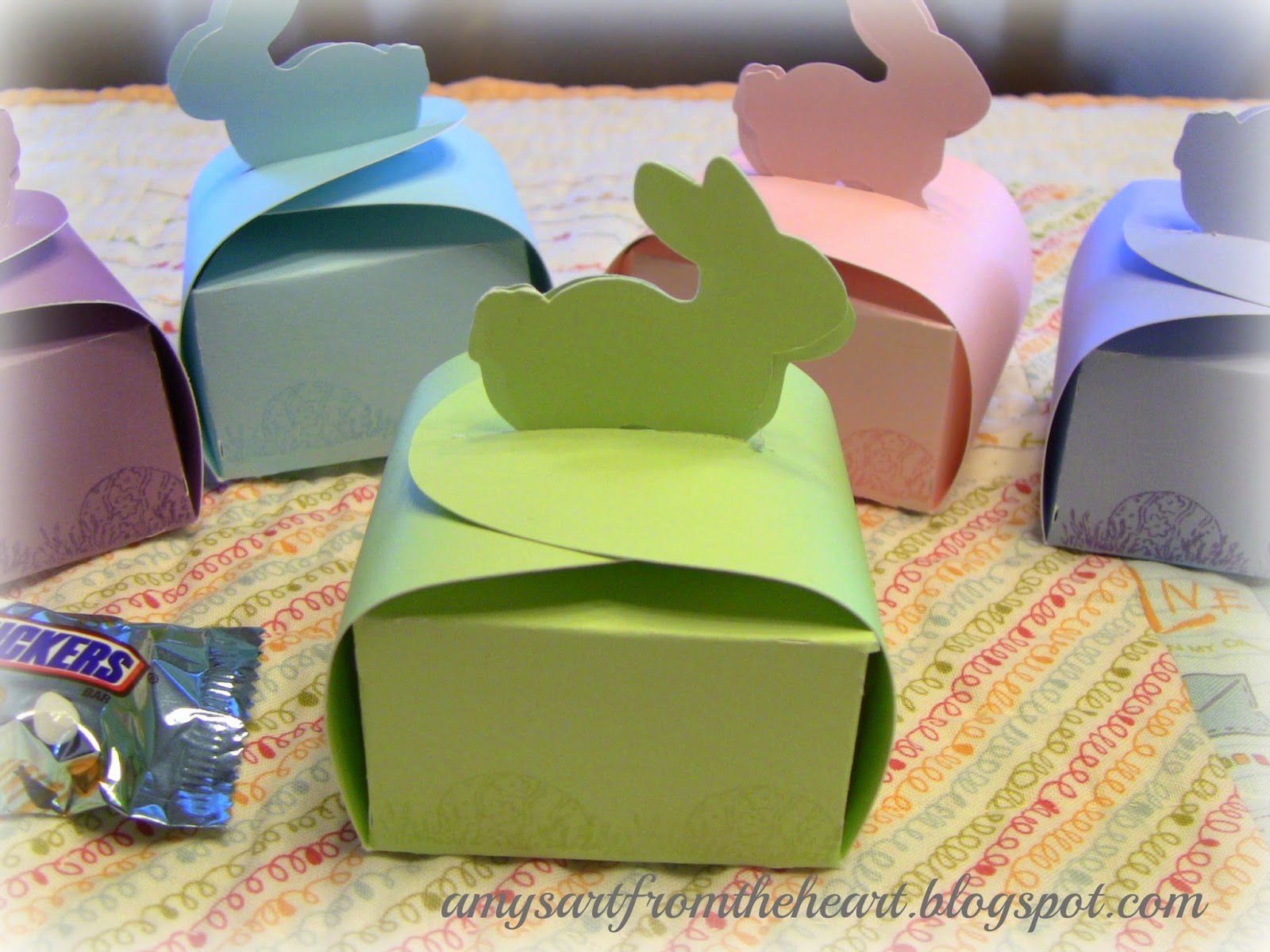 What a fun song playing on the radio stations! It inspired the title of this Birthday themed layout. 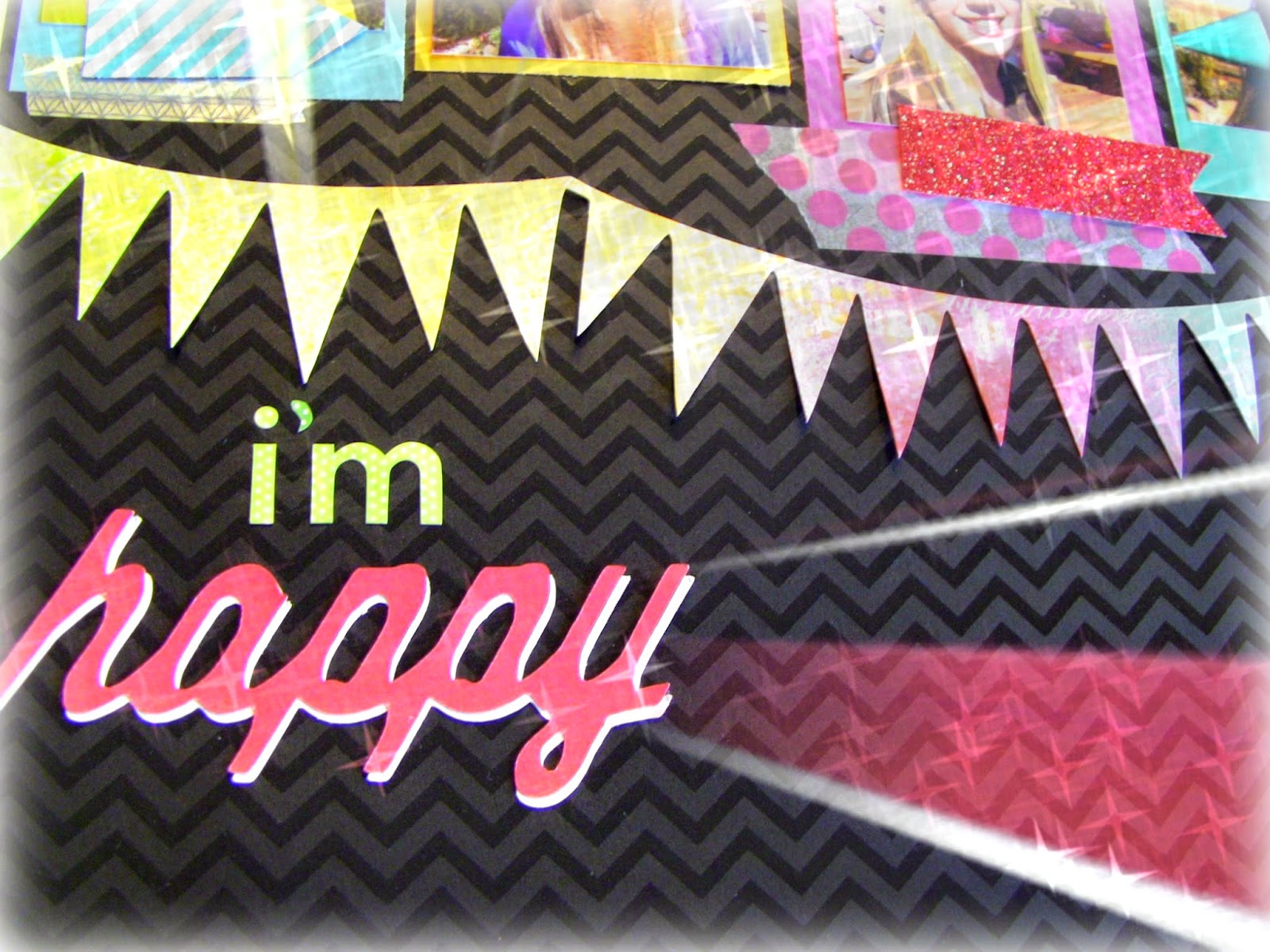 The left page of my layout was inspired by the Spring Idea Book, page 126. I love the new fundamental papers with their trendy, glossy resist patterns. I was also captivated by the bright cardstock papers and Washi tape against the black chevron. 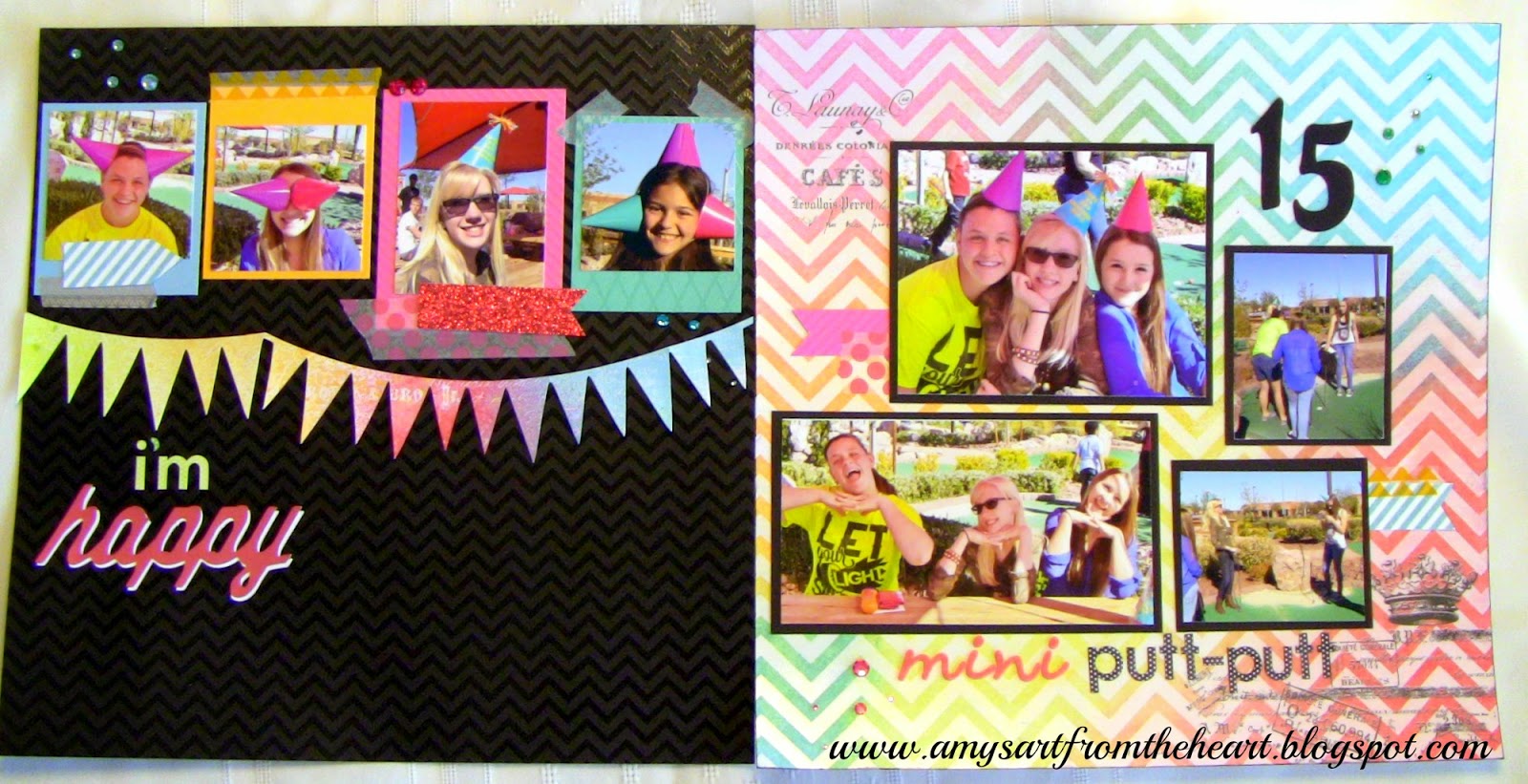 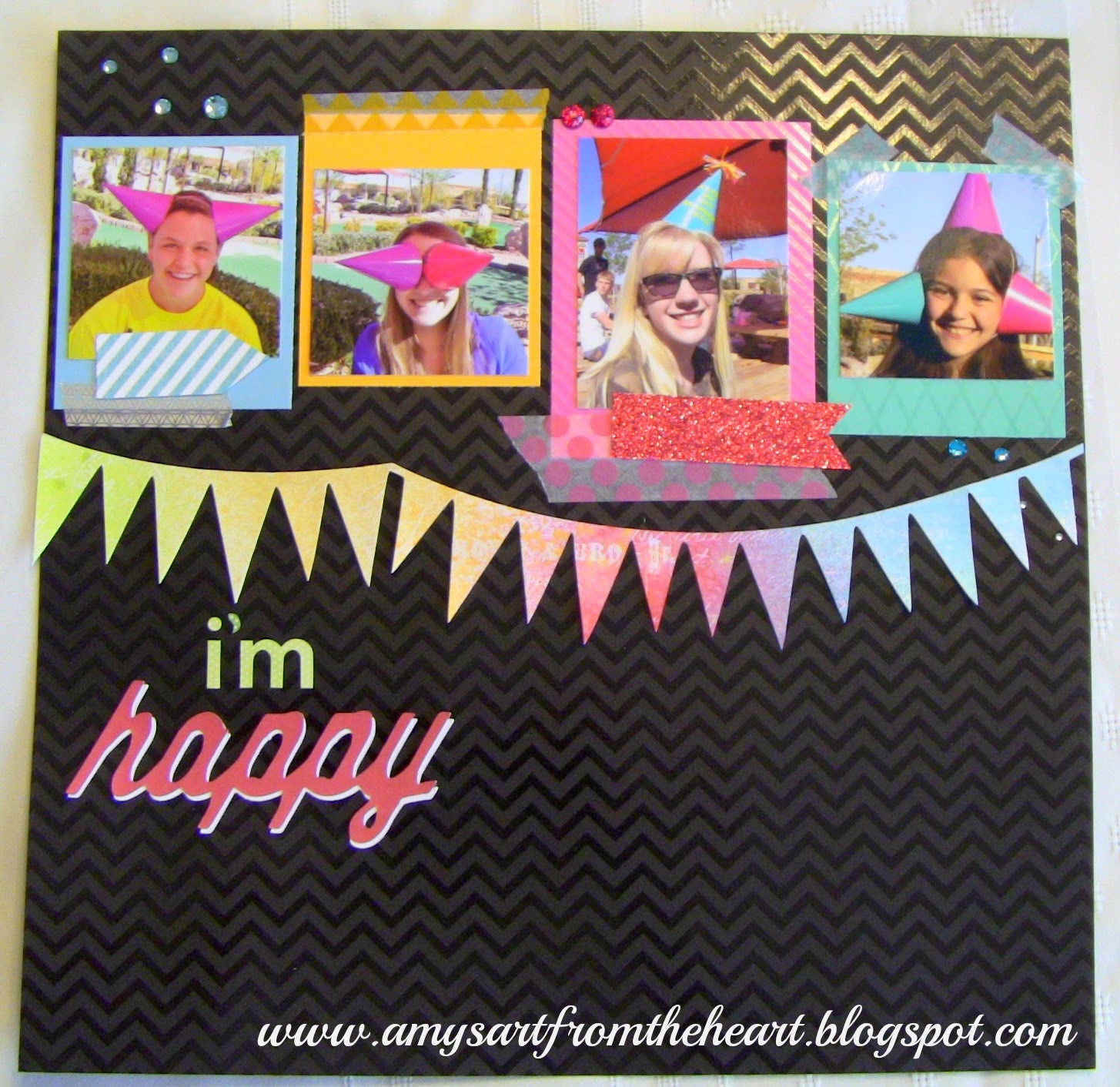 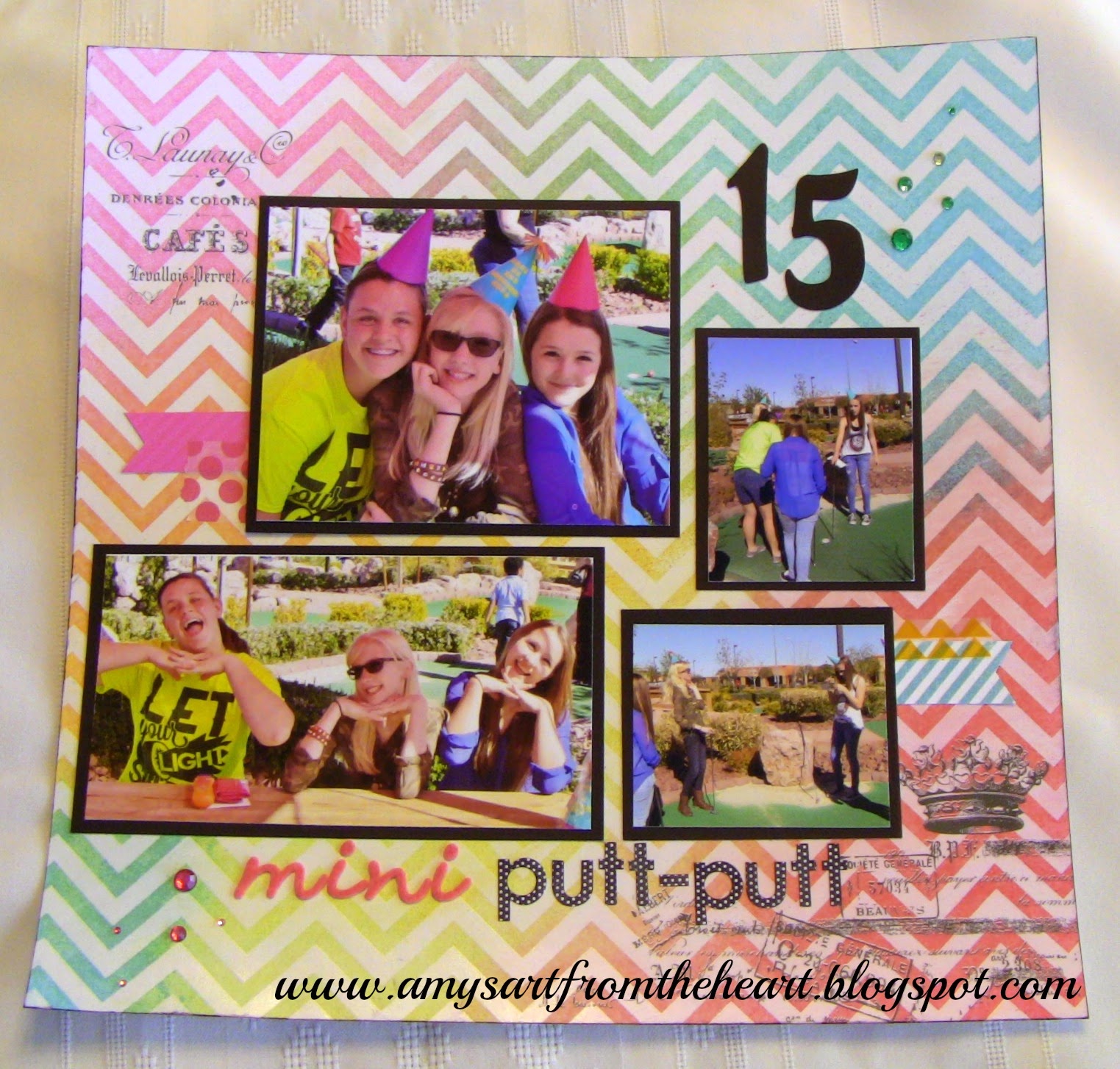 Crazy and colorful! Beautiful faces with great big smiles!! This layout makes me so happy!!!

Bag in a Box

This is a simple and cute project that I taught during my Spring card exchange. These darling little bags in a box were created using the We R Memory Keepers Envelope Maker. {Yes, I realize it's not Close To My Heart. It was a gift from one of my customers and I wanted to share some ideas using it....besides I used all CTMH papers and stamps to create them!!} A Cadbury crème or caramel egg fits inside perfectly so it's a great idea for Easter just a few weeks away! These would be awesome for little favors at a Birthday, Shower or Wedding too!﻿ 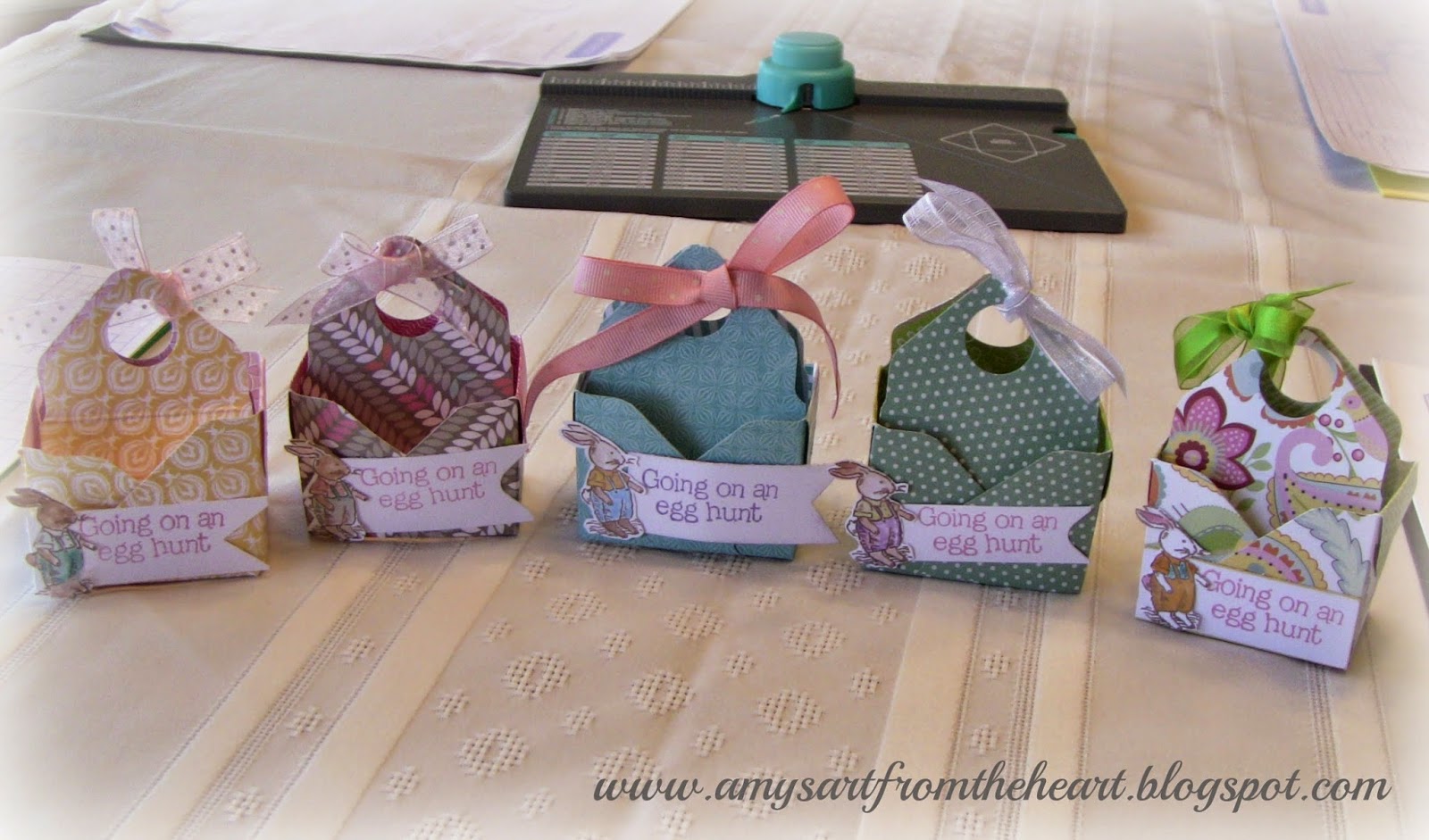 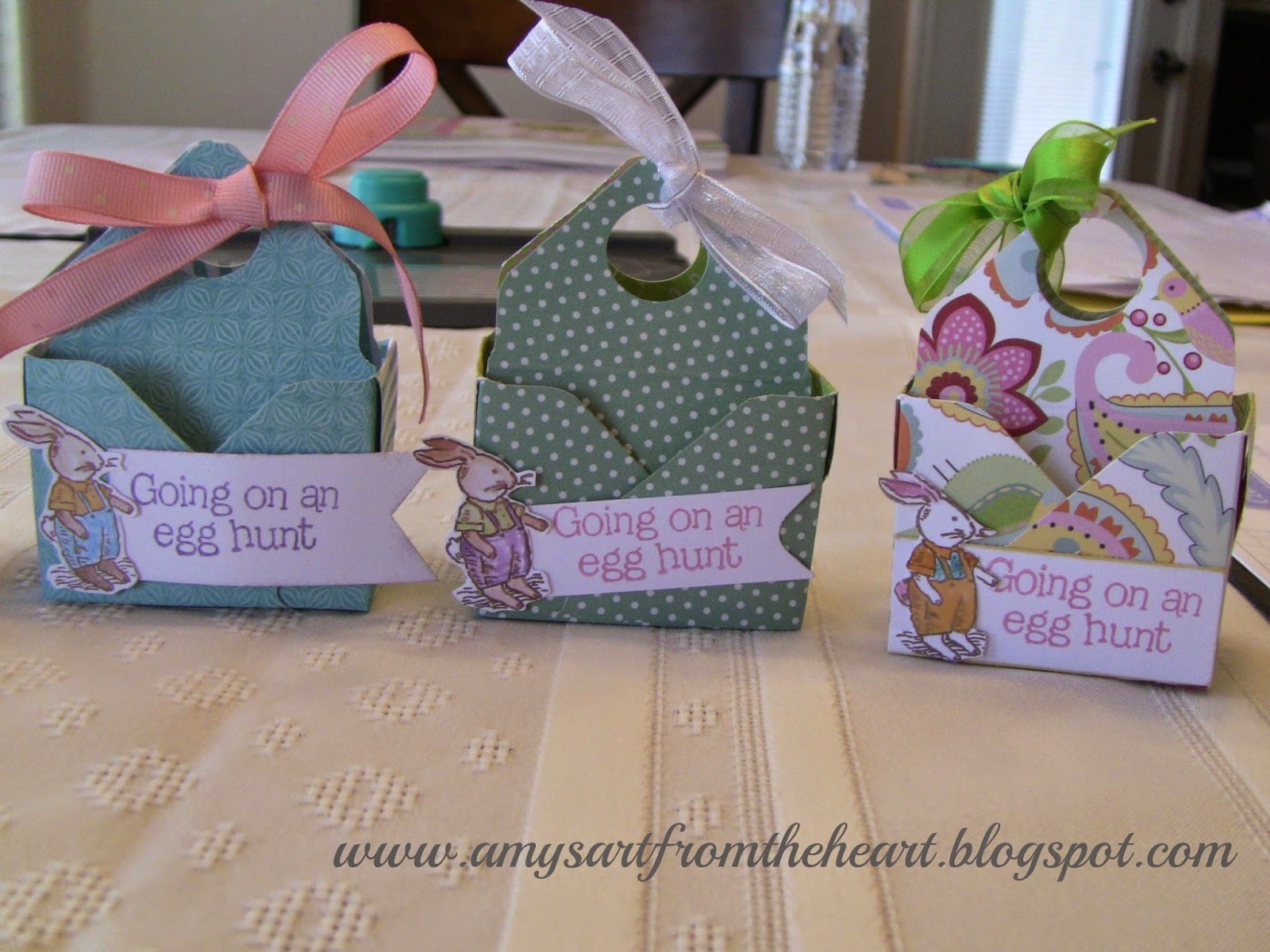 Amy Moore
Nevada, United States
I am a creative mom with 2 wonderful children and married to my high school sweet heart. I am a Close To My Heart consultant. I love all things crafty. My goal is to share my passion of art through inspiration and teaching. Thank you for visiting! 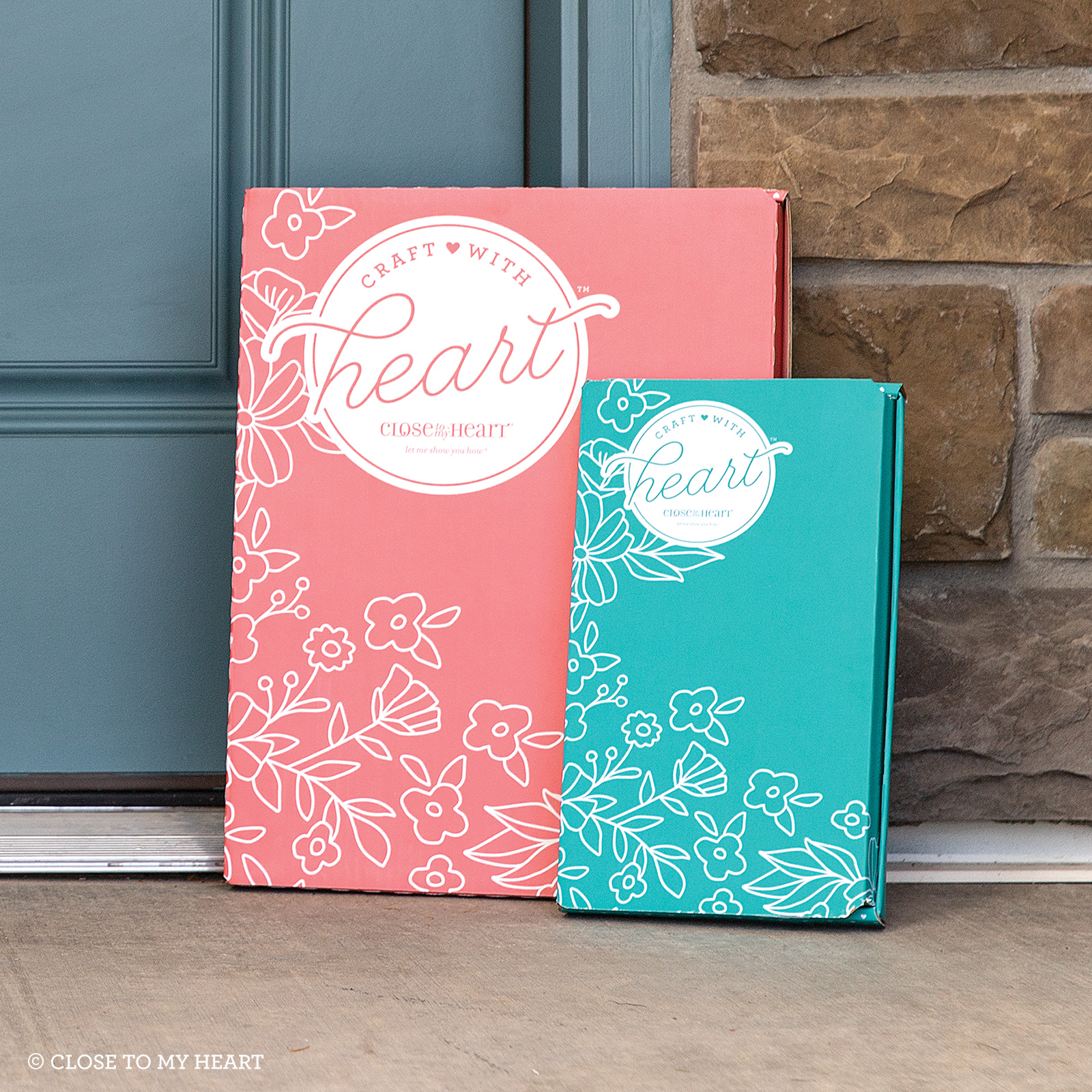 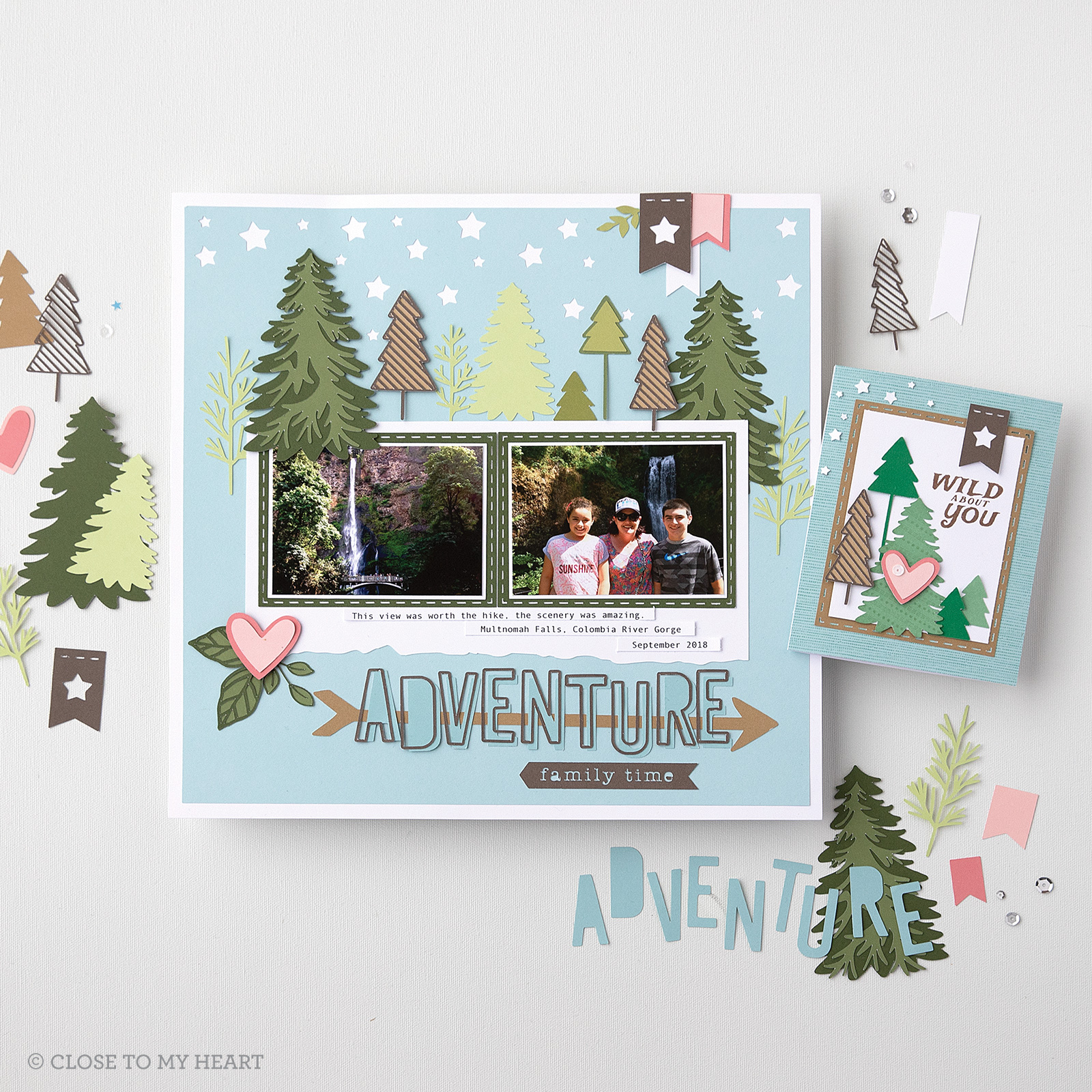 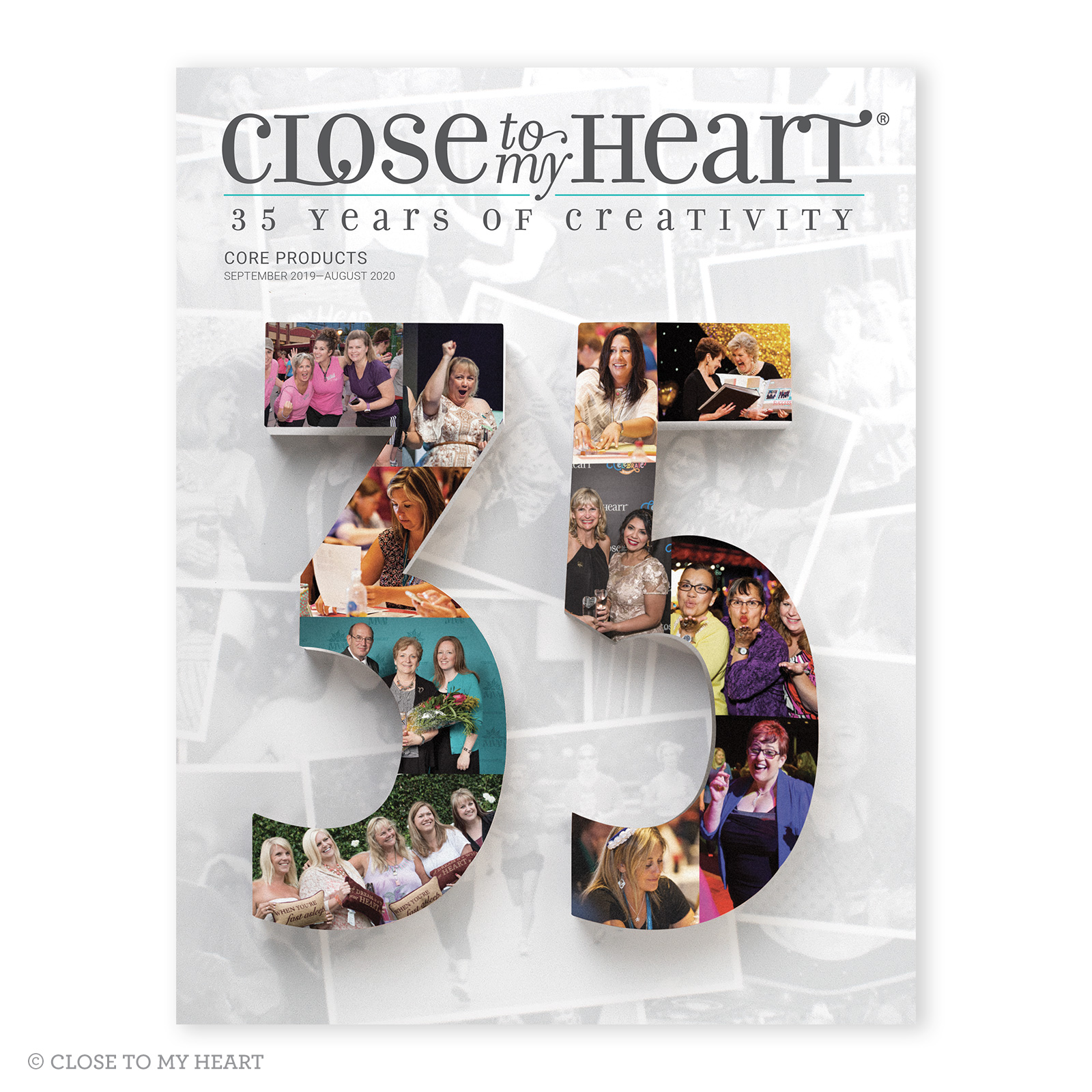 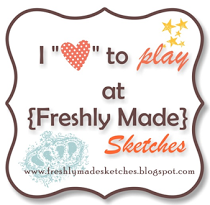